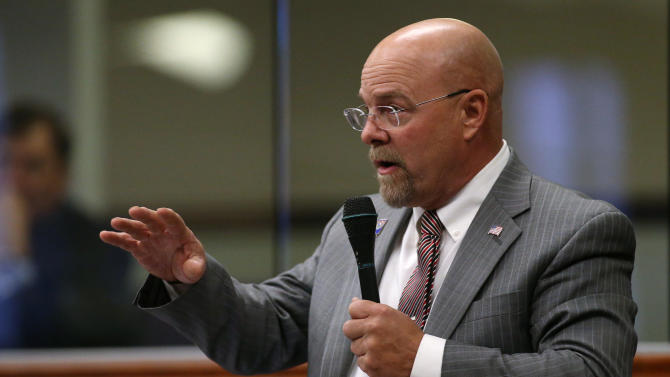 I got some intel from some GOP insiders, who filled me in on exactly what happened during Friday's marathon session:

It appears that Pat Hickey never had much of a chance to be elected as speaker after serving as minority leader. "It went downhill quick," one source told me.

Most of the night was a negotiation, with Ira Hansen eventually agreeing to give the majority leader slot to southerner Paul Anderson.

Fact was Hansen started with, as one put it, "all the new members and the Fiore wing," a reference to Michele Fiore, who does not like Hickey and whose best friend, Victoria Seaman, was just elected.

So, with a majority at the outset, "Hansen had the votes so it ended up more like a negotiation than an election," one source told me.

Even though this is being portrayed as victory of the conservatives over the moderates, and there is something to that, one insider told me this had as much or more to do with Hickey's more low-key style: "The caucus voted someone in who is not just different ideologically but maybe more importantly stylistically. Style won as much as ideology last night."

Many in the caucus, the source said, "wanted someone who wouldn't toe the company line and was willing to make some noise. Hickey always tried to cater to everyone else as opposed to lead himself."

So the irony of this red wave, this Sandoval Sweep, is that it cost Hickey his leadership even though he was -- was -- the leader of a caucus that won 10 seats. And the Hansen speakership sends a message to the mansion, too, one source told me.

"If we learned one thing from last night it's one thing we already knew: This caucus does not like being told what to do by the governor."

Have I said how much I am looking forward to the 2015 session?

When I first heard that the new Assembly speaker would be one of the "H" caucus, I said Ira Hansen would be the most fun.

So now moderate Pat Hickey has been deposed by Hansen, an obstreperous, outspoken Sparks lawmaker who also represents parts of six rural counties, a perfect bookend to the last Republican speaker 30 years ago, another obstreperous, outspoken legislator from Elko named Bill Bilyeu. (He won't want to emulate Bilyeu's results, though: The next session Democrats went from 17 to 29 seats.)

Hansen, who has only served in two regular sessions, is as fiery a presence in that position as any we have seen in decades. He will not go with any flow, marching to his own drummer and letting his colleagues and lobbyists have it when he thinks they are wrong. He also has a long-running battle with state wildlife officials and faces illegal trapping charges.

If there is a single impediment to some grand bargain on a tax plan and tax reform, the newly constituted Assembly caucus just elected him.

He is a speaker who will not be scared to speak out, just as he inveighed against NV Energy's massive bill last session and lambasted the BLM after the Cliven Bundy raid.

The irrepressible Hansen, part of a large family that has always been active on the far right, also can't help himself, too, as he once joked that Alzheimer's patients are "Harry Reid supporters." He also said earlier this year that the GOP can attract young voters only by embracing the "Pat Robertson wing" on the party.

He supported Sue Lowden over Gov. Brian Sandoval's choice for lieutenant governor, Mark Hutchison. I doubt the governor's new partner will be much help in dealing with the new speaker.

Unlike the new Senate Majority Leader Michael Roberson, who hopes to tax mining, Hansen wants to protect the industry, active in some areas he represents. Indeed, when Roberson proposed his tax last year, Hansen said the move was about Republicans stabbing each other in the back.

But Hansen is not just an occasional loose cannon. He reads bills, unlike many of his colleagues. He is a business guy, a plumber and former journalist of sorts. Indeed, Hansen lost his radio show years ago when he questioned U.S. foreign policy vis a vis Israel.

Here's what he said in 2001: “Israel totally abuses the rights of the indigenous people that live in that area and forces Jewish settlements into places that aren’t legally part of Israel,” he says. “It’s a horrible injustice against these people, and it has not been rectified.”

But Hansen also said something else back then that is a harbinger for the 2015 session:

“I’m just as harsh with Republicans as I am with Democrats," he says. "If somebody does something right, I’ll praise him. If he’s doing something bad, I’ll blast him with both barrels regardless of ideological orientation."

He will work with Speaker Kirkpatrick as well as Cresent Hardy di and better than Pat Hickey. He just got a new set of spurs but he will ride for the Nevada brand.