So the biggest GOP donor, a presidential nephew and a birther walk into a fundraiser....

Talk about eclectic: Incipient congressional candidate Niger Innis runs the gamut in his first fundraising event scheduled for next month, with the largest GOP donor in the world, the son of a former president's brother, a Republican presidential hopeful forced from the 2012 race and Nevada's most famous birther.

Officially, the Nov. 5 event is for "The Niger Innins Congressional Exploratory Committee" and is hosted hosted by ex-Las Vegas mayoral candidate Victor Chaltiel, who is close to Gondolier Numero Uno Sheldon Adelson, the first name on the host committee.

The "special guest" is Herman Cain, the pizza magnate who had to leave the presidentila race after POLITCO's reporting about alleged sexual harrassment. Paul Lowden, Amy Tarkanian, Jeb Bush, Jr. and Adelson lieutenant Mike Leven also are on the list along with Wayne Allyn Root, who has claimed Barack Obama was a foreign exchange student at Columbia and continues to insinuate himself into Nevada GOP politics despite being a serial, self-promoting embarrassment.

I actually think Innis has potential as a candidate -- he's smart, energetic and connected. And the National Republican Congressional Committee clearly likes what it sees so far. One GOP source told me: "He has a good list of people he can go to for money and I think that’s going to be helpful. A large portion of the primary vote also comes from his area, so he has that going for him as well. He’s also been on camera forever, which, means that he has said a lot and there’s a lot out there that can be spun. Granted, I don’t think he’s said or done anything that makes him unelectable, but there is information out there on him."

The other potential GOP candidate, Assemblyman Cresent Hardy, filed with the Federal Election Commission last week and was at the Nevada Day parade with Sen. Dean Heller. He's also on the NRCC's radar screen, and it's clear to me that the national Republicans are not overwhelmed by Rep. Steven Horsford and his relatively tepid fundraising. 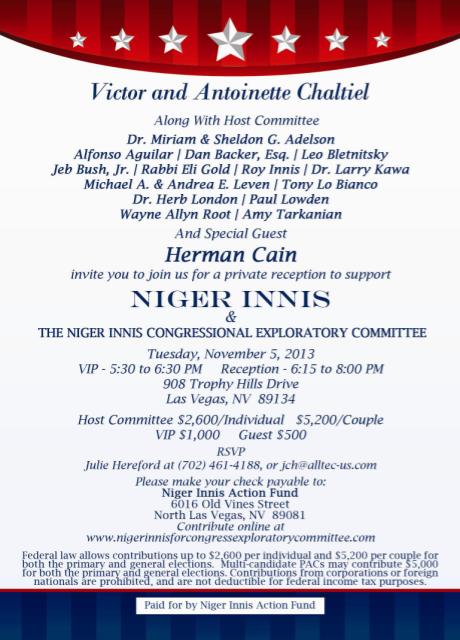