The shape of the session to come 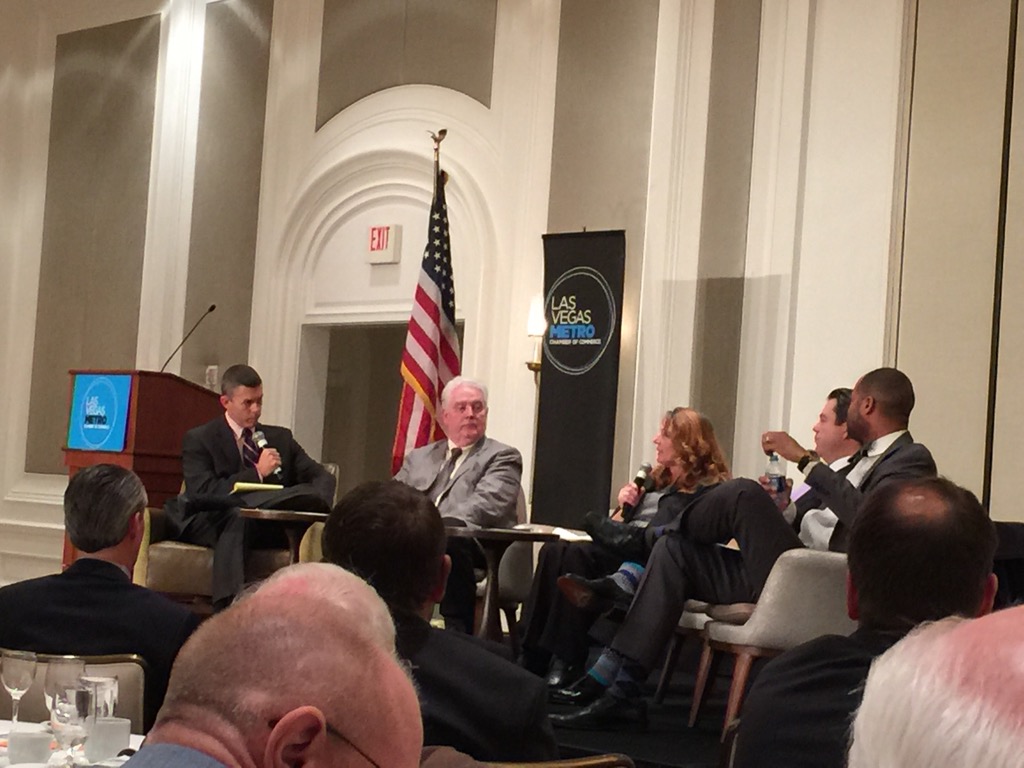 I acknowledge that I had low hopes for Monday morning’s Las Vegas Metro Chamber/Las Vegas Review-Journal forum with the four legislative leaders.

I expected evasions, platitudes and mush. News? Not a chance.

Oh, make no mistake: The lawmakers committed all the above rhetorical crimes. And there was the requisite and quixotic southern jingoism – UNLV will get its medical school, by gum, or at least some funding, even though we have no idea how much!

But the lawmakers also made news, both by what they said, how they said it and what they didn’t say.

RJ editorialist Glenn Cook asked tendentious questions reflecting his ideology, but they were not just right questions, they were the right questions. And what surprised me was just how much news came out of the hour-long discussion at the Four Seasons before a crowd of more than 200 people.

Most evident was the bipartisan commitment, despite the math problem caused by the GOP Ass. Caucus, to an education funding plan that will require a tax increase, especially with a $175 million deficit walking in because of roll-up costs. But what also was manifest was how difficult it will be to get both houses and both parties on the same page in the taxing method, although a sales tax on services sounded DOA.

Here’s what we learned:

►Speaker-du-Jour John Hambrick told me before the forum began that he believes his 13-12 caucus may now be about 17-8 – that is, The Sane Sub-Caucus has peeled off about five members of The Clown Sub-Caucus. If that holds, with the 17 Democrats, there is a realistic chance of counting to 28 in the Assembly on a reforms-for-money package. Sobering note: “It’s difficult for me to speak for the entire caucus, as most of you know,” Hambrick said right away, and repeated similar locutions during the 60 minutes.

►Senate Majority Leader Michael Roberson asserted himself, as he tends to do at such gatherings, as a laid-back and focused lawmaker, sending clear signals that he will not be the bomb-thrower he was in the minority nor will he push conservative ideas he may have supported in the past. In so doing, he likely was echoing Gov. Brian Sandoval’s agenda that will be outlined in his State of the State on Thursday. Roberson, while saying he would not step on Sandoval’s speech, said the governor’s education reforms would be “profound” and “bold.” That reform-for-money plan surely will include school choice and expanded charter schools and more (Teach for America funding) to help corral votes for a boost in education funding to pay for more English Language Learner funding and all-day kindergarten

“I do think this session will be different,” Roberson said, sounding sincere and making me remember all of those empty promises from Democratic leaders almost exactly two years ago.

But this was the keeper quote from Roberson: “Many of us, Republicans and Democrats, have come to the realization that we are not funding education adequately in this state….From the first week of the session, we are going to vet all these tax reform proposals  people are talking about….we are going to pass tax reform out of the Senate, I hope, by the month of March.”

Unless something bad happens on the Ides….

“We will always find places to cut waste and excess,” Roberson said later, giving a sop to the right. “But there is no way to get around the math on this. We need more money to fund essential services in this state.”

Roberson also asserted that he is coming into the discussion without “a bias toward one fix versus the other…..Ultimately we need 14 votes in the Senate and 28 in the Assembly and the governor’s support for tax reform.”

Alas, that sounded very much like his predecessor’s oft-repeated “everything is on the table” mantra. I am optimistic that Roberson is better at clearing the dirty dishes off that table and not leaving behind the same mess lawmakers biennially do.

►Assembly Minority Leader Marilyn Kirkpatrick offered up that she will be reducing exemptions in the Live Entertainment Tax, which she has been talking about since, I believe, she was a toddler. And she also mentioned that some big businesses “pay less in property tax” than many residents, a problem she wants to fix. But Kirkpatrick, who is term-limnited, also has plans for a broader solution that will take time, even after she becomes a Clark County commissioner in 2016.

And Kirkpatrick added, “We walk into session with a $175 million shortfall…We have to be careful not to throw out revenue plans without knowing what they will generate….We have rainy day funds we have to fill.”

And promises to keep....

►State Senate Minority Leader Aaron Ford insisted the November destruction of The Education Initiative was a “rejection of a very specific tax….It’s clear that the people of the state want education funded…..The reason it made it to the ballot is the Legislature had not done its job.” Ford added that Sen. Pat Spearman is developing a plan right now….Her idea would be…..lower the rate and expand the base,” a clear reference to a sales tax on services and an idea every other lawmaker on the stage showed disdain for later in the program.

Despite the bipartisan aura, there were harbingers of fissures and even the credit game that so plagued lawmakers in 2013, when Democratic leaders refused to work with Roberson and tax mining, thus paving the way for last November’s carnage up and down the ticket.

Ford said the most urgent need in Nevada is school construction and reminded everyone that the Democrats had tried to pass a measure to allow districts to automatically roll over school bonds during the special session to approve Tesla. (That was, of course, the wrong venue for such a plan, but Democrats wanted to create an issue against Republicans for the election. And although it has widespread support, will pass early in 2015 and undoubtedly be embraced by the governor, I’m not so sure it should simply be rubber-stamped because we are talking about what some will see as a circumvention of the voters.)

Roberson immediately jumped in and said, “I think this is a bipartisan idea….Senator Becky Harris carrying a bill to do just that.”

Yes, Harris, a GOP freshman, will be the sponsor of a bill the Democrats have long pushed. Elections have consequences.

(A few hours after the session ended, the Senate Democrats put out a news release headlined: “SENATE DEMOCRATS RENEW PUSH FOR SCHOOL CONSTRUCTION, CALL FOR BIPARTISAN LEGISLATIVE ACTION” Rejected headline: “IT WAS OUR IDEA!” In foreshadowing of debates to come, the release boasted of doing the bond rollover “without raising taxes (emphasis theirs), which is tantamount to arguing that not allowing taxes to expire is not a tax increase. I bet they’ll love that analogy.)

The Democratic leaders, though, know they have plenty of leverage because of the 28-14 math for both houses, so they will not be ignored. Ford is seen as a moderate Democrat and Kirkpatrick has bipartisan respect. And for the first time in a long time, if both sides can contain their most extreme partisan impulses, the Democrats can be passengers (back-seat kibitzers?) as the Republicans are forced to drive. Elections confer responsibility, too.

Amid other pronouncements that indicated lawmakers will punt on recreational pot (no surprise) and pass something on construction defects reform (Ford seemed amenable and Roberson suggested a broader, "aggressive" tort reform agenda was coming  -- hello, governor?), perhaps the most interesting part of the event was near the end when Cook asked about the twin labor bête noires of collective bargaining and retirement system reform.

Roberson couldn’t have made it clearer that those agenda items were not high on his list.

Now that sounds like a guy who really wants to get things done, and I don’t mean mend fences just so he can run for the U.S. Senate.