Hambrick to locals: We are with you on collective bargaining reform

The AFL-CIO plans to respond to Hambrick's letter at a news conference Tuesday. Why? From the notice: "At a time when Nevada is facing many serious challenges, Nevada Assembly Republicans have made it a priority to wage war on working families, instead of addressing the real issues.  In a letter to local governments, Speaker-Designate John Hambrick offered to let them make any changes they want to collective bargaining.  We believe legislators should hear both sides before proposing sweeping changes, and working families deserve to have their voices heard.  Collective bargaining ensures fair wages for Nevada workers to provide for their families.  Taking away workers’ rights does not balance budgets or boost the economy."

Some details on what will be in the Assembly GOP bill from someone who knows: "The thrust of it is to give local governing boards the option of bargaining with any employee group as opposed to keeping it mandatory.  I suspect not much will change in Clark County, but it may in places where voters and their elected officials aren't as keen on collective bargaining for public workers.  There will also be requirements for unions to pay for their own staffing out of dues instead of city- or county-paid leave time."

Speaker-du-Jour John Hambrick on Thursday sent a letter to local government leaders saying his caucus "has determined that public sector collective bargaining reform will be a top priority" during the 2015 Legislature.

In a letter that begins, "Esteemed Elected Official," Hambrick says the caucus is "committed to reforming state law in a way that returns to you the power your communities have entrusted you with. For far too long, the Legislature has dictated what local governments can and cannot do for their constituents and employees."

In the letter (see below), Hambrick revealed that the caucus has a bill draft that "will provide you the tools to make any changes to the current collective bargaining system as you deem necessary." This will surely be met with a mixed reaction by local governments, which are populated by Democrats but some of whom are willing to change the rules of a game they see slanted toward unions.

Gov. Brian Sandoval paid lip service to the issue in his State of the State. But this is going to be a huge fight -- I can hear the unions mobilizing as they read this -- and potentially an ugly one. 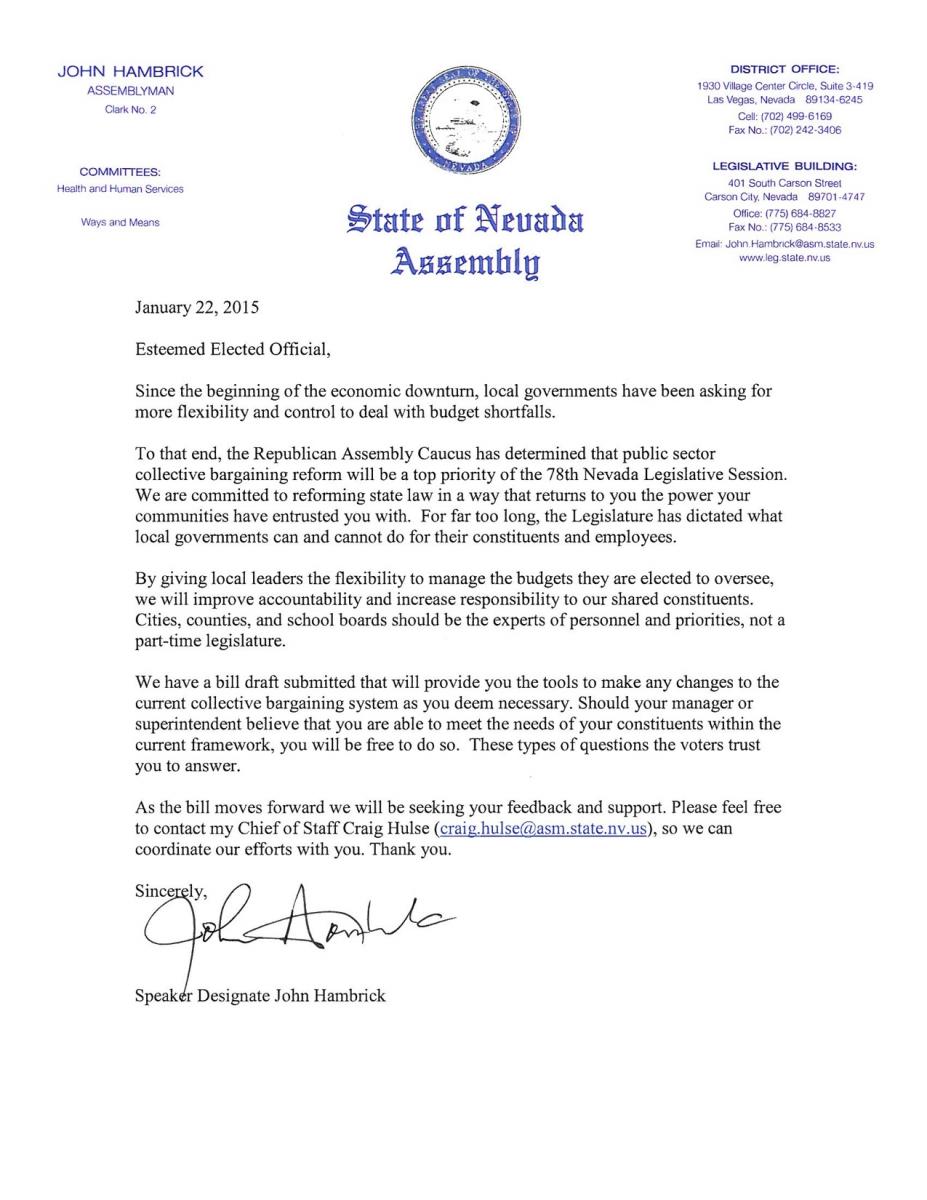