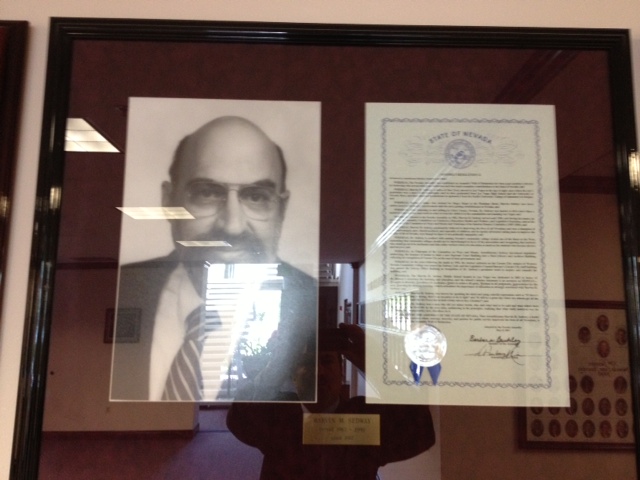 UPDATED WITH COMMENT ON PASSAGE FROM GOV. BRIAN SANDOVAL:

From spokeswoman: "SJR 15 does not come to the Governor and he’s stated that he is opposed to increased mining taxes."

Well, that's more than I usually can, ahem, extract. So we can assume he will be voting against SJR 15 next year? Or maybe he buys the potential tax cut argument?

I'd guess the former.

Twenty-four years after the late Ways and Means chairman fulminated on the Assembly floor about the mining industry’s legerdemain, the Assembly on Thursday approved a resolution, SJR 15,  taking the industry’s mineral taxation out of the Constitution.

The ultimate fiscal impact is not clear – the industry has argued, and probably will do so in court, that it is a tax cut because a resolution approved by voters in 1989 more than doubled the rate in the Constitution. But the symbolism is inarguable.

Let’s not forget where we came from on this: Just four months ago, lawmakers were poised to kill this resolution, having been spun into paralysis by a mining-funded legal opinion that indicated SJR 15 would blow a $300 million hole in the budget.

It was dead in the Assembly, and maybe even the Senate. Mining had won without lifting a lobbying finger.

I started sniffing around when I heard about it, but I don’t want to take credit for turning the tide. I would never do such a thing.

What really changed the dynamic was a shocking development – and, yes, it shocked the industry, too – that happened one month into the session. That’s when state Senate Minority Leader Michael Roberson and his Dirty-Half Dozen declared they wanted to tax mining, a move that was predicated on SJR 15 passing.

Suddenly, the Democrats, who all had backed the measure in 2011, had a political problem: They were furious at Roberson, so they didn’t embrace his idea. But how could they possibly entomb SJR 15 now?

The mining industry understood the changing dynamic, but continued to insist on SJR 15 neutrality, while making the tax-cut argument.

Then, the political winds favoring SJR 15 picked up, thanks to legislative legal opinions that said passage would not result in a tax decrease, thus erasing the budget argument. Although the reality was murkier, the Dirty Half-Dozen, even if they infuriated Democrats (and mining), they erased any of the counter-arguments to entomb SJR 15.

With activist groups such as the Progressive Leadership Alliance of Nevada pressuring lawmakers and hectoring media folks piling on, the Democrats had little choice but to move forward. The Senate passed it in April , and the Assembly followed suit Thursday.

The miners tried to keep up their obvious pretense of neutrality until the measure got to the lower house, and then they opened up with all barrels. (Note contradiction: If miners claim would give them a tax cut, why would they be so opposed? We know the answer. More avenues of taxation equal roads they do not want to go down.)

Late in the game, there even was talk of what amounted to a bribe. But once exposed, no one brought it up again (it was going nowhere.)

I never really believed the Democrats would, in the end, dare kill SJR 15. Even if they believed that mining was right about the budget consequences, the flip-flop would be too obvious and potentially devastating. Roberson & Co. helped give them cover, though, which they apparently needed to break from the mining lobby’s grip.

This is far from over. My guess is the industry may find legal grounds to sue. And if not, the miners can’t just let it pass, even though it appears to be an 80 percent-plus proposition in the populous areas of the state. They could spent a lot of money arguing the tax cut line, with proponents having little cash to fight them.

A preview may have come from the industry’s lobbying arm in a statement we obtained for “Ralston Reports” Thursday:

“The Nevada Mining Association maintains SJR15 will lead to significantly less revenue to fund education and other essential services throughout the state while potentially disrupting revenue streams in rural mining counties as well.”

You know who would have relished the opportunity to fight mining’s campaign next year: Marvin Sedway.

I can see the devilish smile creeping across his face right now.