MY COLUMN: Time for Democrats to take responsibility for lack of education plan, poor taxing choice for voters and Sandoval juggernaut 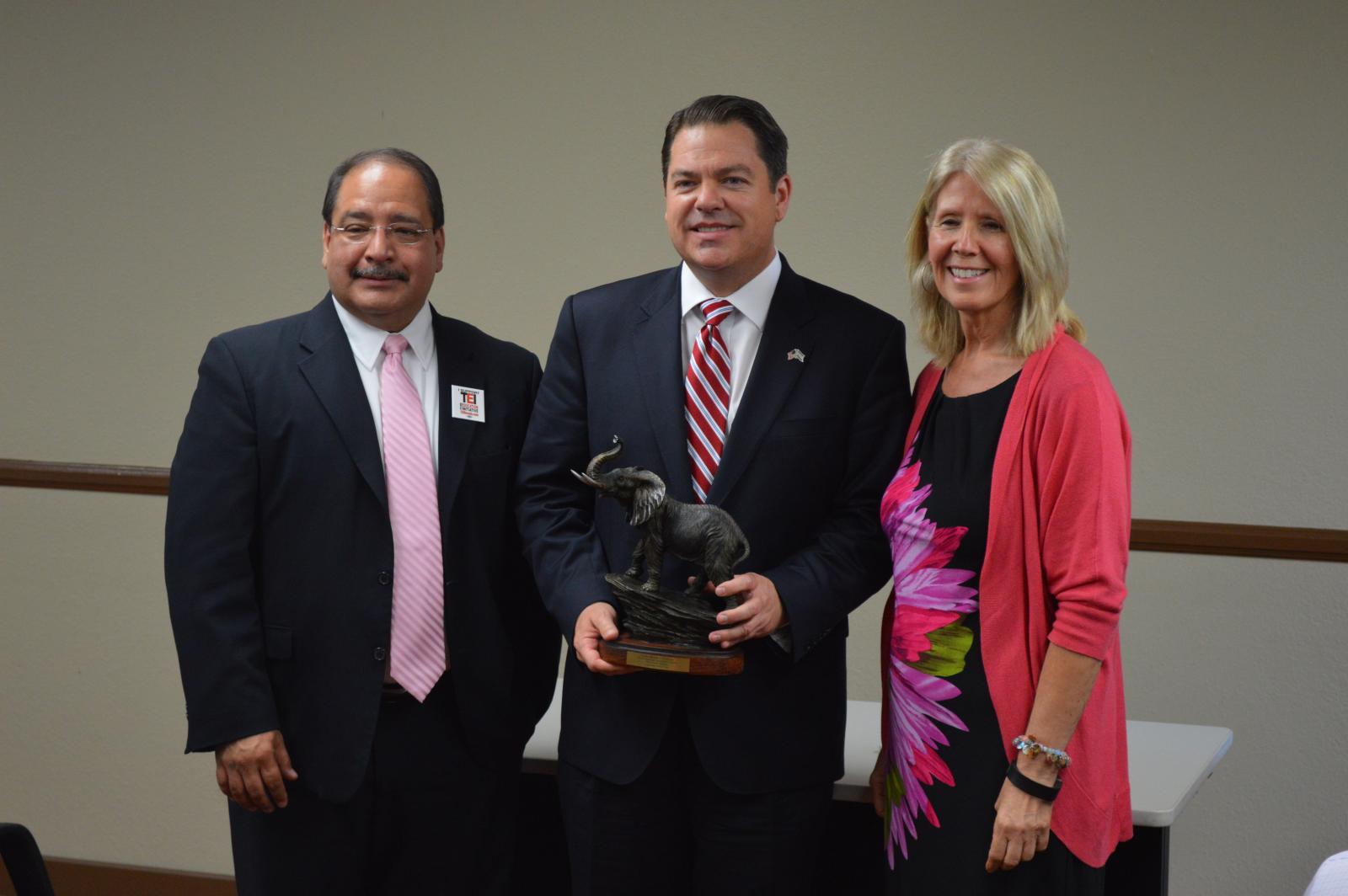 So now we know what it takes to get Nevada Democrats angry and activated.

Not the putrid state of education funding in Nevada leaving the state near the cellar.

Not the devastating crisis in Early Language Learners zooming to nowhere in most Clark County schools.

Not the imagination deficit in most of the approaches to making education better in the state.

No. Not any of those. What does?

A Republican leader getting an education award.

That’s the trigger for Democrats, the legislative party of promising much and delivering little, to finally get engaged. The party that laid the groundwork for a Republican governor to be de facto unopposed and for tax policy to be made at the ballot box or in secret meetings, suddenly is in high dudgeon over....nothing?

If they had shame, which the last two legislative sessions (at least) have proven they do not, Democrats would be embarrassed. Instead, they continue to show they are a hollow political machine, efficient at winning races, not so proficient at getting anything done once they do.

In so doing, they also have ceded the high ground to Roberson, who has evolved/mutated/reinvented himself after initially running as a super-conservative, able to leap over weak incumbents (Joyce Woodhouse) and crush teacher union dreams in one campaign. Now, Roberson is getting his picture taken with union leaders (that's him with state boss Ruben Murillo and Clark County leader Vicki Courtney), running as a Democrat and may be poised to become the most powerful Republican in Carson City outside of Gov. Brian Sandoval.

As the party leaders fret about turnout and how to motivate voters, it's time for them to look in the mirror. Legislative Democrats have become the personification of everything that is wrong in Carson City and politics in general: They beg the public to elect them to run the show because the alternative is a horrorshow, all the while carefully calibrating their positions or non-positions, pledging to make changes and then falling into paralysis once elected so they can…..get re-elected.

Once again the Democrats are asking us to clamber on board their merry-go-round, feebly promising that somehow riding their horses will lead somewhere other than back to where we started. Fool me once; shame on you. Fool me about 10 times; shame on me.

So Roberson – and, yes, Sandoval – are leading (such a concept!) them potentially to slaughter by running as moderates, now aided and abetted by the teachers union leaders, and actually presenting a funding plan (taxing mining) where the Democrats have none.

You have to give Roberson credit for somehow engineering that award and then inducing the teachers union leaders to pose with him, the main legislative antagonist to their education funding tax on the ballot. The Michael Roberson of 2010 would have been mortified!

The Democrats opened the door for this, though, by their legislative performance and by failing to seriously push a comprehensive funding plan this cycle. One-dimensional (mining) is better than no-dimensional?

Maybe Roberson learned his lesson from his first session, which came after a 2010 campaign when he was a frothing rightie and the 2011 session during which he was described as the "conservatives top pugilist".

He certainly wanted to make a deal in 2013 when he proposed a tax increase on mining, the seminal moment in the session when the Democrats made a mistake that eventually helped ensure Sandoval is unbeatable and gave Roberson a chance to flip the Senate. Instead of calling a news conference to welcome Roberson and his five GOP comrades, including Sandoval’s new favorite senator Mark Hutchison, to the tax discussion, the Democrats shunned him and insisted he was simply trying to kill the margin tax.

So what? I wondered at the time. It's not as if the Democrats were supportive of the margin tax, so why not use Roberson's zeal to kill it to make a broader deal?

Instead, both Democratic caucuses refused to embrace a mining tax, wouldn’t even hold a vote on the margin tax and let it go on the ballot, forcing voters to make a choice between a flawed tax and a flawed Legislature. That’s leadership, all right.

If the Democrats had made a tax deal to fund education and included the mining tax and then Sandoval vetoed it, the GOP juggernaut might not look so mighty now, especially with his health exchange making the federal portal look efficient. A real Democratic candidate might have considered entering the contest, and the entire 2014 dynamic might be different.

Or, perhaps, Sandoval might have made a deal with the Democrats on taxes instead of watching the opposition commit political hara kiri and assure the governor's re-election.

Yes, I might be wrong. But we will never know.

What we do know is the Democrats are in trouble and now are flailing, forced to put out hyperventilating news releases when Roberson gets a meaningless award that he simply wants for his campaign. Yes, I understand what’s at stake, and that the opposition can’t let such a stratagem go unanswered.

But I have little sympathy left for the legislative Democrats who had their chance and squandered it. And said news release quoting Democratic hit man Zach Hudson was outrageous:

Michael Roberson has spent two legislative sessions attacking teachers and trying to kill every real attempt at increasing education funding.  Roberson’s priorities are so upside down he even threatened to hold the education budget hostage so he could pass legislation to financially benefit his big campaign donors.  If Roberson really wanted to increase education funding he would have actually introduced a bill to do that instead of simply sending a disingenuous press release and calling it a wrap.  Working for Tom DeLay may have taught Michael Roberson to say and do whatever he has to further his own ambitions, but the voters of Senate District 20 are smarter than he thinks.

I’ll skip the first sentence, which is pure Jabberwocky. The second one has to do with Roberson – and other Republicans – trying to horse trade on construction defects legislation. They tried the same with collective bargaining reform (attacking teachers?) and public employee benefits reform. You know, things Democrats don’t like because of, among other reasons, their “big campaign donors.”

The part about not actually introducing a bill has to do with Roberson's mining tax proposal, which had no support outside the six Republicans. Does anyone think the Democrats would have given it a hearing?

The whole Tom DeLay nonsense (Roberson worked briefly on Capitol Hill) is a meme that is tired and, I hope, not effective. It’s not relevant to the debate, which the Democrats simply do not want to have.

Yes, folks, Michael Roberson was a very conservative guy when he got into politics -- or at least masqueraded as one. But he is now a moderate, or posing as one (he still espouses some very conservative ideas), participating in private meetings with Speaker Marilyn Kirkpatrick and others to try to put together an alternative education finding package that – wait for it – Gov. Brian Sandoval would sign. Yes, this is familiar story in Nevada, and I am cuing up Lucy and Charlie Brown and the football montages.

But Roberson has cultivated county teachers union boss John Vellardita, and they have a symbiotic relationship, which also probably helped with that HUGE award. The union clearly is divided on strategy moving forward, but that picture of Roberson, Murillo and Courtney is worth more words than are in this column. (Wait, that didn’t come out right.)

Yes, Roberson wants to kill the margin tax. But at least he has a plan, albeit a one-dimensional, single-industry initiative that won’t solve the problem in the long run.

But it’s a start. And a little more history from 2013: The Democrats, having succumbed to the mining lobby's song of doom, were about to entomb Question 2 on this year’s ballot, which would finally after 150 years remove mining's tax cap from the state Constitution, until pesky media members made an issue of it and Roberson forced them to vote it out of the Legislature. Again, leadership.

Yes, Roberson has changed, and the Democrats are wary. I understand.  But what they seem to care about most is retaining the Senate at all costs, sowing fear about Roberson & Co. (vouchers and choice and PERS reform, oh my!) and hoping their turnout machine saves them. We know what they don’t like; we have no idea what they want to do or if they have the capacity to follow through.

The more salient question is whether they should be given the chance after the 2011 session of charades, where they presented a visionary funding plan a few weeks before the session ended but knew it had no chance, or the 2013 session of broken promises, where they pledged to have a substantive dialogue but rebuffed the GOP leader and gave us an inchoate outline at the eleventh hour.

The Democratic leadership in Carson City has brought Nevada to where it sits today, with a controversial tax plan on the ballot and no alternative in sight, except for the rumbles of proposals inside those private meetings. Why should we trust they can cobble anything together and get it through the Legislature without building public support now? I’ve seen that movie before (2002) and I know how it ends (2003, two special sessions).

I have been infuriated, albeit hardly surprised, by the Coalition to Defeat the Margin Tax folks paying lip service to the need for more education funding but deflecting whenever they are asked about an alternative. But the party in power in the Legislature is even worse, with most of them cowardly mutes on the margin tax. So I ask all of these Democrats wailing about Roberson’s education award and his mining tax idea, and scurrying away from The Education Initiative: What’s your plan?

If they don’t answer by November, they deserve to lose the state Senate majority.