The campaign for the most important item on the Nevada ballot has begun with a mailer to voters from the folks trying to kill what they call the “Margin Tax Initiative.”

The piece, which is below, is quite something in what it says and what it doesn’t say. For instance:

►There is no such thing as the “Margin Tax Initiative.” It’s called “The Education Initiative.” I wonder why the foes don’t call it that.

►While we are talking about names, this group lists some of its members on the side of the piece, starting with the Nevada Taxpayers Association, which is a credible arbiter of tax policy. Then, sprinkled amongst names of small business types, all in very small, faded type, are the names of the groups actually funding the anti-TEI initiative: Nevada Retail Association, Nevada Resort Association, Nevada Mining Association, the Las Vegas Metro Chamber of Commerce. Let’s be clear, though: This effort will be primarily funded by Big Business, not Small Business.

►The rhetoric begins in the first sentence, warning “Fellow Nevadan” about a “huge new $750 million per year ‘Margin Tax’…." Oh? $750 million That’s the higher end of an estimate from Jeremy Aguero, the coalition’s paid consultant, and a projection that is nearly $300 million more than the Guinn Center for Policy Priorities.

►“The proposed tax would severely damage our state’s already struggling economy.” It would? Proof, please.

►The argument then goes to the “increasing the costs” argument, which might come as a surprise to Fellow Nevadans who shop at big retailers in other states and find the prices the same despite business taxes.

►Then we get to the standard buzzword, scare tactics, the creation of a “whole new IRS-like state bureaucracy…” Paging Franz Kafka. And the: “And it would essentially hand a blank check to the politicians and bureaucrats to spend however they want, without requiring any oversight, reviews or accountability.” Really? You mean the way it works now? Accountability? I think it exists; it’s called Election Day.

►Then the brazenness quotient grows larger: “Moreover, after three years, the politicians could also lower the revenue threshold….or broaden the tax to apply to even more businesses – without any further vote of the people.” Oh, the horror! They would do their jobs?

►The letter expresses horror at businesses being taxed “even if they make no profit!” Oh, so they support a new profits tax? Why, that would create – what should I call it? – an IRS-like state bureaucracy!

►The piece quotes the Review-Journal, which my Fellow Nevadans might want to know is not for this tax.

►Then the hyperbole meter is pinned:

“Make it nearly impossible to attract new businesses looking to invest in Nevada.” As it has in Texas, which is thriving with a margin tax, even has the biggest job growth in the country.

“Give the Legislature unlimited authority to increase the tax rate after three years.” You know, as it can with any tax right now. Seriously?

►Then the standard, if you tax business, “we all know who ends up paying – we do.” So you see, you can never tax business, the reductio ad absurdum we hear EVERY time.

Then comes the pitch to join the coalition of Fellow Nevadans to fill out the postcard and join the small people multitudes. And it is signed by folks from the chamber, taxpayers association and…farm bureau. I guess no one from the Strip or mining was available.

If this were a parody, it would have been indistinguishable.

The margin tax is flawed, as most taxes are. It may even be fatally flawed. But I still have heard of no alternative from these folks who supposedly care about education. And until I do, their apocalyptic language grates much more than it persuades. 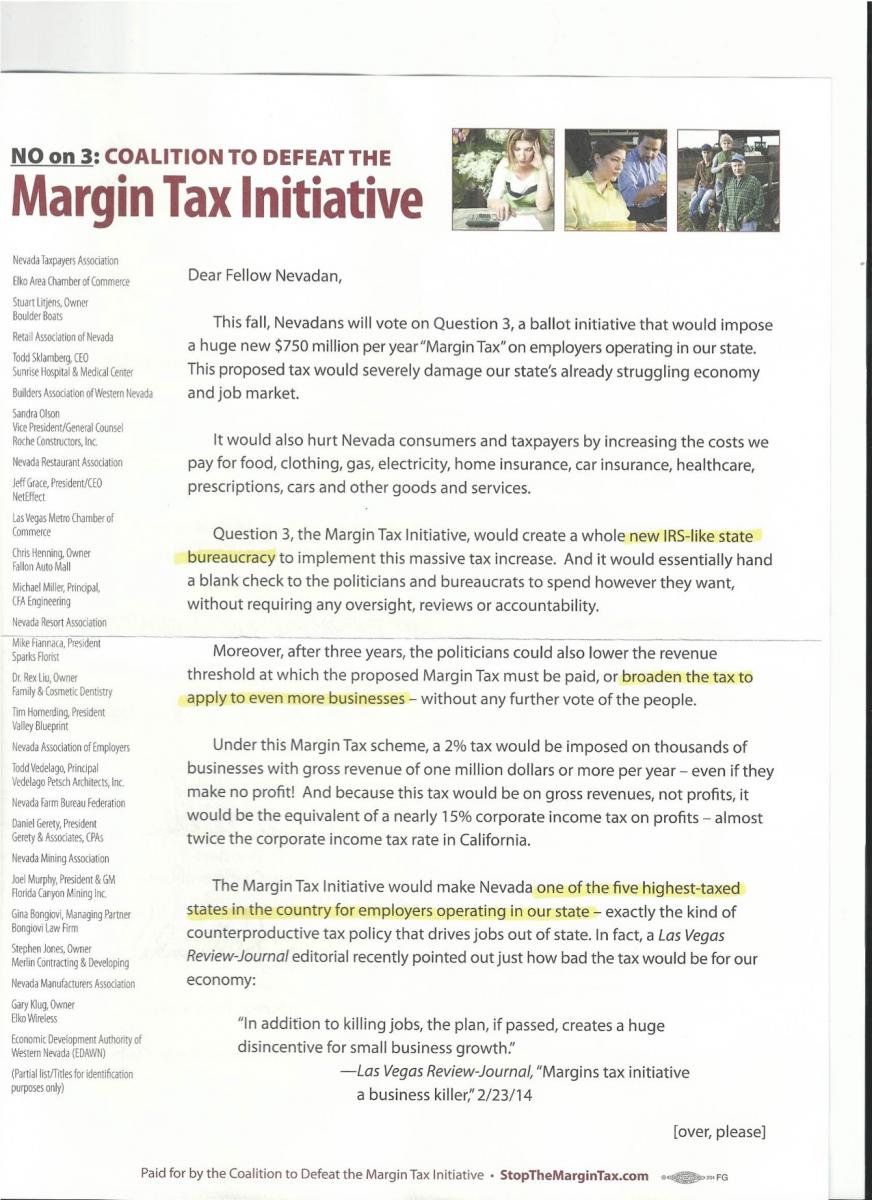 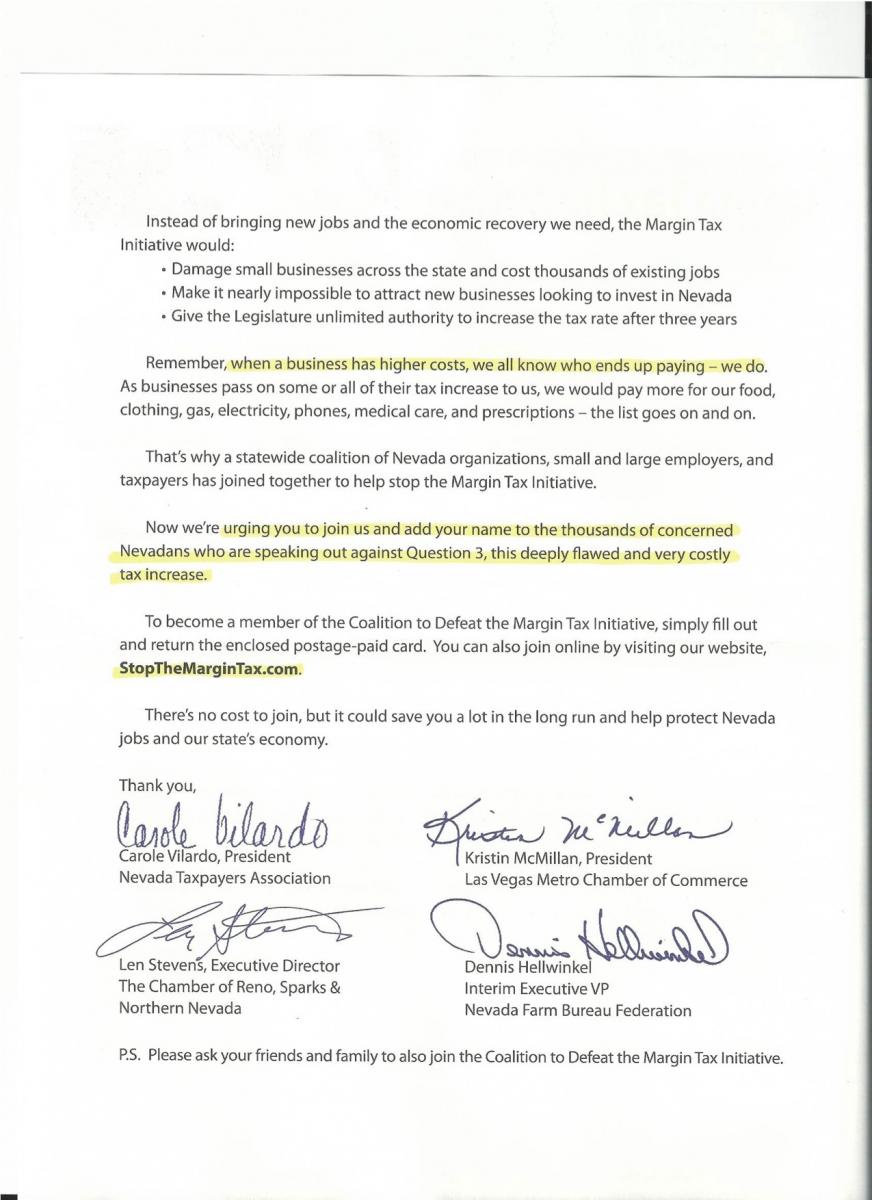