"Game of Thrones" is the best political show on TV 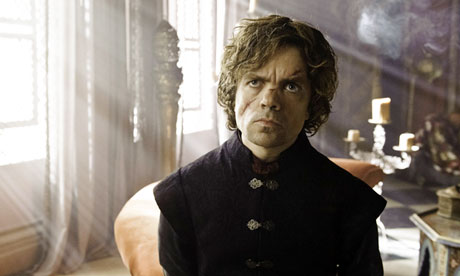 I think my favorite moment in the first three seasons of “Game of Thrones” is when Cersei responds to Littlefinger's explanation of how he knows that she is sleeping with her brother by telling her, “Information is power.”

The queen regent responds by instructing her guards to slit his throat, then immediately relenting, looking at him icily and explaining, “Power is power.”

I found myself smiling, just as I had been tickled by other priceless dialogue and horrified yet transfixed by the wondrous images and plot twists after plowing through the HBO series during the last few weeks. I was not one of those kids fascinated by Tolkien’s books (or ever moved to read the series source material,  "A Song of Ice and Fire") nor have I been one of those adults who ever liked the fantasy/sorcery genre.

But “Game of Thrones” is not just some Otherworld where dragons breathe fire and blue-eyed zombies have superpowers. It is instead the best political show on television, with engaging characters, beautiful dialogue and lurid plotlines.

The violence can be jarring and revolting, but it seems endemic to the world depicted, one where ambition and ruthlessness are prized and women, while so often bit players and seen as sex objects, also inhabit some of the most critical and nuanced roles.

You can imagine some of the more cutthroat pols, from LBJ to Bill Clinton to Harry Reid, moving effortlessly through a world like this, sans swords but with the same nasty, brutish methods to acquire and hold onto power. DC may not have the real blood or regular nudity that nearly every "Game of Thrones" episode has, but the nation’s capital has the same regular bouts of bloodlust and events strip the players naked.

But enough comparisons to real life: On its own, as an intriguing, riveting and most of all, unpredictable, tableau, “Game of Thrones” is an unending delight, even as I winced and cringed at some scenes. (Poor Theon Greyjoy!)

Although the nudity often seems gratuitous (hey, we are on pay-cable!), the violence, while graphic, seems warranted to emphasize the kind of world being depicted. It reminds me of complaints decades ago when Stanley Kubrick’s “A Clockwork Orange” was released, with its ultraviolent world.

But Kubrick, like Thrones creators D.B Weiss and David Benioff, knew that the violence is not pointless. Indeed, in "Game of Thrones," the carnage makes a point, and here it can come out of nowhere as a reminder of just how brutal that world is, how quickly a life can be snuffed out.

Most of all, what enthralled me about “Game of Thrones,” besides keeping all the characters and various throne-seekers and their families straight, were the brilliant characterizations, most of all by Peter Dinklage.

Playing the dwarf and all-but discarded son of Tywin Lannister, Dinklage has created a fully realized and unique inhabitant of this series. He is cunning yet kind, bitter yet amused, tragic yet heroic. And the words that come out of his mouth are so acerbic, so clever, so poetic. He is a never-ending delight –  like Roger Sterling on “Mad Men,” a detached, cynical viewer of the world in which he lives but often drawn into the drama, and inevitably displaying his human side.

But while Dinklage is the heart of a series that often seems heartless (with Sean Bean’s Ned Stark so shockingly departed so early), there are plenty of stunning supporting performances, especially by Charles Dance, so imperious and cold as the patriarch of the Lannister clan. (If you have never seen “White Mischief,” find it today.) Dance is not on screen nearly enough and when he is, he is marvelous.

There are others, too, including some of the female characters. Lena Headley as the queen turned queen regent has some of the best lines and shows how a woman survives in a male-dominated society. Emilia Clarke as Daenerys Targaryen (those names!) grew from a scared, innocent girl, being used as a pawn by her brother, to a powerful leader who may someday win the game of thrones. Michelle Fairley, before her demise in the penultimate episode of Season 3 (I saw that scene coming and still it was the single most harrowing scene of the series), was a stout matriarch whose love of family was evident in her every breath. And Maisie Williams, who from the moment she hit the bulls eye in the first installment as her hapless brother shot arrows everywhere but the target, is developing into a young girl who you sense could sit on the Iron Throne one day.

The ensemble is just terrific, with Nikolaj Coster- Waldau making Jaime Lannister’s evolution utterly believable; Aidan Gillen and Conleth Hill as two scheming courtiers delicious to watch; and I would be remiss in not mentioning the wondrous Diana Rigg, who is just perfect in the role of the Tyrell family matriarch.

I acknowledge that I find some of the sainted Stark characters not so engaging (I shall not miss Robb and Jon Snow always seems to have the same pained look on his face). But good is always less interesting than evil, n-est-ce-pas? An exception is King Joffrey, who while monstrous seems almost one-dimensional in series that, in its characterizations and images, always operates in many dimensions.

What has struck me about the series is how interesting and important characters disappear – or should I say are executed before our eyes – and are replaced by new ones, whose destinies are yet to come. I eagerly await their fates in the coming season.

“Game of Thrones” is not for the faint of heart, whether you are queasy about excessive violence or nudity or if you always expect the good guys (or gals) to win in the end. But if you are interested in a world about securing and keeping power by any means, populated by fantastic characters who seem more real than those you see in the tedious Washington version, start watching now and get ready for Season 4.

(Image from The Guardian.)