Damage control by UNLV and Hillary only highlights damage

Generally, you don’t need to deploy damage control unless damage has been done.

The parallel efforts during the last week by Hillary Clinton and the UNLV Foundation – both clumsy and heavy-handed – attempt to obscure that these wounds over her obscene $225,000 speaking fee are wholly self-inflicted. And the arrogance and defensiveness are cringe-worthy and obnoxious, especially since both seem to care so much about higher education.

Don’t misunderstand: There are some wonderful people at the UNLV Foundation who care deeply about making the university a first-class institution. And Hillary Clinton’s record includes many initiatives designed to improve higher education. Fine.

But being taken for almost a quarter mil by a prospective presidential candidate does not enhance the university’s standing, as some boosters assert, but hearkens back to the days of Tumbleweed Tech and a school whose foundation was laid by Tark the Shark and the Runnin’ Rebels, not any great commitment to academics.

This is either Hillary vs. the Rubes, which is no contest. Or a bunch of rich donors who are willing to give her the money for a selfie rather than donate it to a student whose tuition just got jacked up 17 percent. Or, worst of all, this is another reflection of a Vegas Zeitgeist that values seats in Gucci Row over a seat in Tier One, that prizes big political names over big student achievements, that covets access over academics.

We know where the road paved with good intentions leads, and it’s no wonder students are lamenting this awful decision, especially since past speakers, including Hillary’s husband, have charged a fortune and produced not much. (See chart below.)

I acknowledge up front: I don’t think anyone is worth $225,000 for a speech. Even if Clinton were to announce her White House candidacy during her remarks (she won’t) or give insider details not in her book (that could hurt sales), she isn’t worth that much, nor anywhere near it. Nor is anyone.

I will, however, defend to the death (well, maybe not all that way) Clinton’s right to charge whatever the market will bear, even if I think it is outrageous. It is her decision to extract such an appalling fee from an educational foundation, and UNLV’s acquiescence to her demand (I understand she wanted even more) that has me reaching for the sphygmomanometer.

The partisan reactions to this brouhaha have been depressing, if not predictable. The Republican faithful are all aquiver and piling on while Democrats are reflexively defensive and deflecting.

I expect that drivel. But the twin damage controlling I find offensive and pathetic.

It took the crack UNLV PR team – collectively paid more than $225,000 a year, by the way – about a week to unearth the profit/loss information for previous speakers. Their protestations that they had to dig deep, as if they were the Leakeys at Olduvai Gorge trying to excavate precious remains of early man, was only more obvious when the results came in showing all the red ink and the hefty speaking fees.

Then, after my producer, Dana Gentry, reported what we had requested, the Review-Journal’s Steve Sebelius disclosed just how swimmingly sales were going for Pearls From Hillary (and I mean pearls, even if the swine are not appreciative!).

Of course, the regents defended their foundation patrons, and one booster actually emailed Gentry to tell her I was “way off base on this one, and unfortunately I think it's damaging the university.”

Or explain your finances and non-profit model to these kids you have helped or, better yet, ones hoping for your generosity.

It’s immaterial whether the dinner, as the foundation seems poised to claim, makes a little money or a lot of money. It’s the principle that these folks, as they line up for their pictures with Hillary, ought to be thinking about. Optics matter here, and the message they and Hillary are sending the students is the same one once attributed to Marie Antoinette.

Las Vegas Sun owner Brian Greenspun, who helped get Bill and now Hillary to speak because of his close relationship with them, told The Washington Post: “All Hillary’s doing is getting paid what she normally gets paid for giving speeches — not much more, not much less — and she does honor to the university by coming.”

Honor? Really? Should attendees bow to her as she enters, too? Or just throw, as Mitt Romney might have said, $10,000 bills at her as she approaches the dais?

As for Clinton’s effort to blunt any criticism, the serendipitous disclosure that she is giving the money to the Clinton Foundation made me chuckle. How convenient.

First, the Clinton Foundation’s finances are murky, as The New York Times reported, and Republicans are understandably frothing. Coming as it did amid Hillary's inartful “dead broke” claim and news that the Clintons are worth $100 million, the UNLV imbroglio received national attention, as did the student objections.

Politico’s Ben White pierced the damage control efforts in one tweet: “Until we have clear view into Clinton Foundation finances I don't think 'I gave it to the Foundation' is much of an answer.”

But forget those atmospherics. Hillary can take care of herself, especially with local protectors such as Greenspun.

I am amazed that no one has asked the most obvious question of all, especially since the Clinton Foundation’s spending is so foggy: Why should donors who supposedly care about the university want to give $225,000 to an out-of-state foundation instead of the local one set up specifically to enhance quality education at a school more known for basketball than academics?

I wonder which needs the money more. 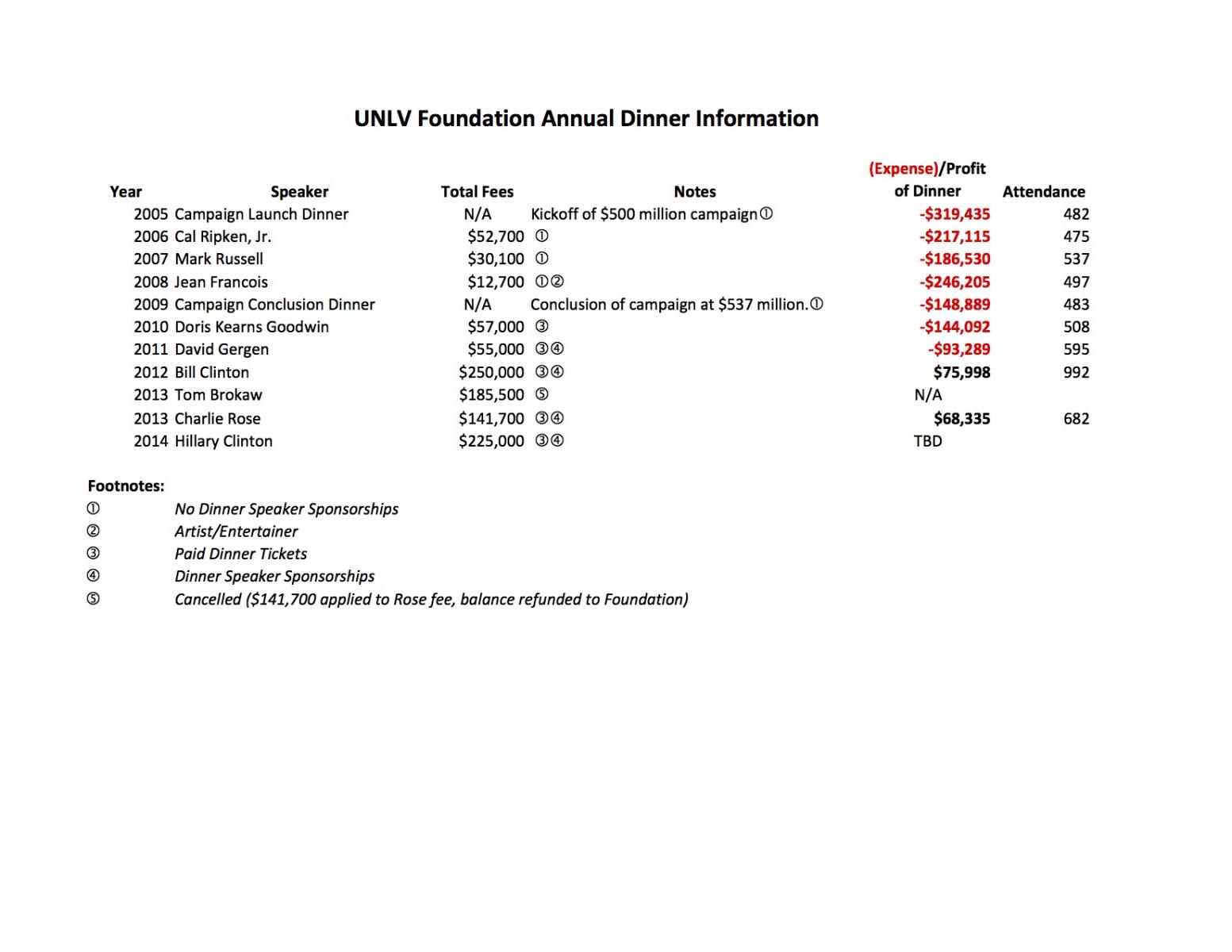